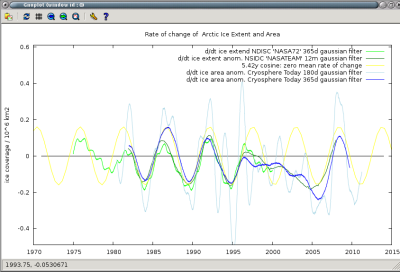 What I considered a banal comment and an interesting plot about rate of change in Arctic sea ice area, that I posted on RC, has got Grant Forster a.k.a. “Tamino” sufficiently alarmed that he has made it the pre-occupation of his blog (laughably called “Open Mind”), according it two articles in the last week.

The discussion following his first hit piece resulted in him  blocking all further comment from me to avoid explaining why he though up was the same as down in the rate of change plot. His stated reason for not explaining to poor fool me, who still thought that up was the opposite of down, was “I’m not going to help you”. Strangely, his article claims to “school” me, yet he does not want to help me see where I’m wrong.

When I attempted to correct some of the other fictions he had spun out of my brief comment at RC he responded by more ranting and calling me liar twice, before running to hide behind his control of the blog content and permanently blocking my right to reply.

Come out all mouthy and then run and hide behind the door. Impressive that Grant, really impressive.

I invited him to assess for himself whether that was the actions of an open minded scientist or a cowardly bigot.

I have my own personal opinion on that but I’ll leave him and others to decide for themselves.

So why such vitriol. Why did this merit such effort on his part for such a trivial comment at  #52 somewhere on an open thread on a fast moving blog.

Heck, there’s enough garbage on the internet every second for some short blog comment, that is supposedly wrong, to be safely ignored. Maybe he thinks I’m onto something.

Thankfully Grant Foster has co-authored one climate paper and seems to know his way around, so he was able to provide some useful input.

In his first article he reproduced my graph from the Cryosphere Today’s data, so that provides corroboration of the extraction and processing.

In his second thread he created some artificial “random” data using and AR1 model to provide a comparison.

Now, because of the 12 month gaussian filter they are both smooth curves of a similar scale. However, there is no obvious pattern in the AR1 model, no repetition of peaks at equal spacings.

The series of equally spaced cycles, broken by a 10 year period of accelerating ice loss, is certainly not reproduced by the AR1 test data. Perhaps it’s a feature of the data after all.

He maintained in his first article that my filter had simply amplified some insignificant peak out of the noise. But if that was the case, the same would presumably have happened with his synthetic AR1 data and there would be a similar strong mid-range cycle in the filtered AR1 test, most likely with a different frequency. But there isn’t.

Whether those cycles are “statistically significant” needs to be looked at in more detail. Foster made a lame attempt at showing they were not but when I raised a technical error he had made in his Fourier analysis, guess what? He deleted my comment from his blog to prevent others seeing his incompetence and refused to discuss any further, removing all my replies.

Now whether he is simply so bigoted and intolerant that he can not abide anything or anyone that disagrees with him, is a possibility that cannot be ignored. However, if that is not the case it would suggest that there is something in my analysis of that data that he feels a strong need to suppress.

I did intend to write this up at some time in the future. Foster’s reaction makes me think this may merit more immediate attention.

Thanks for the tip Tammy. Your encouragement is most welcome and thanks for the limited help you were able to provide.

Appendix
NOAA’s Arctic Oscillation index has also just gone below the the long term mean. Another indication that there is either multi-decadal natural variability now going negative or, at least a return to stable conditions.

The AO data is long enough to suggest it covers a full 60 year oscillation, though one cycle is not enough to clearly establish such a pattern with any degree of certainty. However, it certainly does not show any “run away warming” or “tipping points”. Quite the contrary.

The latter part of the AO record is consistent with my observations on the rate of change.

What happens to a science blog when moderators lack moderation

Having contributed an article to Roger Tatershall’s “Talkshop”, it seems I have fallen foul of The King’s wrath.

I am now banned from all discussion on this “top science blog”. LOL

Premier offence of Lèse-majesté: I used the word “magic” in reference to something His Majesty posted.

That saw all my subsequent posts blocked pending royal approval.

Second offence of Lèse-majesté: I did not reply to a question He asked me, on a thread I was no longer watching because he asked me to let them get on with it.

All subsequent posts again blocked pending that fulfil my servile duty and help His Majesty understand a Wikipedia page He had failed to read properly.

That was followed by an amusingly threatening email: “I’ll give you another hour to reply.”

I pointed out that this kind of behaviour, that Warmist sites are often scathed for, was not appropriate to open scientific debate and that I would not longer be contributing.

Predictably that also got removed without a trace. Anticipating that would happen I took a screen shot.

So did I break site rules , apparently not:

And mind your manners while you do it.

Apparently that advice about manners is for others. Of course it does not apply to His Majesty.

[Moderators Reply] It looks like Greg prefers to flounce rather than accept his arse on a plate again – this time re barycentric orbits and solar inertial motion. Some people just can’t admit when they’ve got it wrong. Especially not to themselves. Not even when you give them the relevant JPL documentation to read.

In fact, on both occasions this “arse on plate” story is part His Majesty’s own personal fantasy world.

When I try to point out his false claim about what the JPL doc says, since he apparently did not read it or could not understand it, I find I’m banned from posting a reply.

Not held for moderation. All posts are automatically binned.

So much for scientific debate.

Apparently Willis Eschenbach also got banned some time back for criticising a paper His Majesty liked.

Now everyone is entitle to run their own little corner how they choose.

Just don’t pretend you are a top science blog if you’re that touchy about the slightest criticism and not prepared to allow open debate.

The rest of the discussion is worth reading. Some especially interesting posts from Paul Vaughan and Ian Wilson.

Grant Foster aka “Tamino” , having started a very vitriolic hit piece on my methods finds himself in a corner and uses his editorial control to avoid seeing something he does not want to see.

Grant’s with his “Open Mind” has his eyes firmly closed it seems. Here’s my final challenge to him to explain why he disagrees that the rate of change of Arctic ice is receding. He chose to snip all further comment from me rather than reply to two simple questions. Open mind …. my foot.  Read the preceding posts to understand the context.

Greg Goodman says:
So what is your problem with explaining why you disagree. “Here’s my guess: ”  the data shows something you do not wish to recognise ?

Now you know that up is really down but are not prepared to “help” me by explaining why. You’re going to keep the all important explanation  to yourself until I produce something else you can use to distract attention and hopefully everyone will have forgotten you were going to  “help” me to understand why up is down.

So if I show you something else that shows a change in direction in the Arctic, why would I expect that you will do anything different than
tell me that you disagree, that  I know nothing, but won’t say why because you don’t want to help me?